J.G. Ballard was the infamous chronicler of “dark history”. His stories and novels are set in the years that followed World War Two. This period of history was marked by immense social and cultural change, but in Ballard`s fiction his characters are almost hermetically sealed off from the rest of the world. The results are unsettling.

Their lives are bizarre, perverse and barely human. However this bizarre and perverse universe has been revived for the twenty first century. Shamima Begum is the creation of a modern technocratic society that is almost entirely insulated from humanity.

Her fait accompli has been sealed through the combination of a weak, prevaricating Government and a section of liberal appeasers. Her appeasers have chosen to indulge her self-centred adolescent arrogance and immaturity and excused her aberrant behaviour.

Her life story resembles a notorious terrorist from an earlier time. Ulrika Meinhof was a violent anarcho-communist who, in cahoots with her partner in crime Andreas Baader sought to rid Germany and its allies of “fascism”. 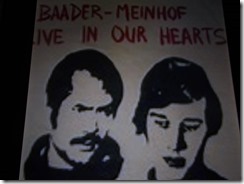 Meinhof, like Begum was a cold hearted fanatic indifferent to suffering and seemingly devoid of pity. It did not matter to her if innocent people died, in her mind anyone living a bourgeois life was a legitimate target. The Baader-Meinhof gang were responsible for a wave of bombings and murders, but they were indulged by naive liberals who were easily manipulated. As a result they grew bolder and more savage in their attacks against the West. They were the major players behind the massacre that occurred at the Munich Olympic Games in 1972. A defiant German government intervened decisively to detain Meinhof and Baader and denounce their ideology. Meinhof took her own life in Stammheim Prison on 9 May 1976. She was 41 years old.

In hindsight the reign of terror unleashed by Meinhof and her associates seems incoherent and unnecessary but it was almost allowed to happen by a weak and fragile country struggling to rebuild itself. Germany as a nation was still dealing with the past and feared a return of the tyranny that almost destroyed them. It is easy to see now that monsters can dominate when there is a cultural void. The Millennial years have reanimated the monsters that we thought had disappeared, but for our own sakes we must quell the monsters.